Home » Blog » How to Scuba Dive With Sharks (& Not Get Eaten)

How to Scuba Dive With Sharks (& Not Get Eaten) 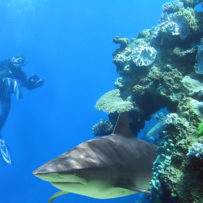 As kids, we all went snorkeling once or twice. Flippers on our feet, life vests, and funny masks kept us safe and near the surface of the water. There were beautiful coral reefs and schools of fish, but that is where the excitement ended.

If snorkeling wasn’t thrilling enough for you, what if you could go swimming with top of the food chain predators? Shark diving is definitely a step up from snorkeling in skill and excitement level. But is it safe?

In this article, I’ve put together a guide on how to scuba dive with sharks, its safety, and where to do it. Thrill seekers read on!

The short answer to this question is yes, generally. As with any other situation that has a chance to be dangerous, your safety can’t be guaranteed. When you are near sharks, especially if you aren’t accompanied by a professional, there is a chance of an attack. But how common is it?

Contrary to what Shark Week & online videos may have you believe, sharks are not the man-eating machines that media has made them out to be. You have more chances of being struck by lightening than you do by being bitten by a shark.

In 2015, there were only six fatalities from shark attacks. That is less than a .001% chance when you compare the 2015 attacks to the world population. Yearly, sharks bite less than 100 people and most of those people (92 in 2015) survive and live to tell the tale.

This data is for unprovoked shark attacks. As you can imagine, a shark will be much more inclined to bite someone who is poking, prodding, or baiting it. If you’re looking at learning how to scuba dive with sharks, make sure the company you use doesn’t use shark baiting methods.

How to Scuba Dive with Sharks

Now that you know the rarity of shark attacks, hopefully, you’re considering diving with these majestic ocean predators. Before you go under water, there are some things you’ll need to do first.

Learning how to scuba dive is not a do it yourself type of thing and you won’t be allowed to dive if you’re not licensed. There are many programs, even in landlocked places, that have scuba diving lessons that can be completed in an intensive weekend or over the course of a month.

The local dive center in your area will tell you what options it offers. It’s also an option to get certified while you’re on vacation, but it takes up precious free time.

When planning out how to scuba dive with sharks, you’ll need to pick a location that sharks are known to frequent. For those living in North American, those include the Bahamas, Mexico, and the waters around Cuba.

If you have a little more vacation cash to play with and want to go diving somewhere exotic, Fiji, South Africa, and the Maldives are all beautiful shark diving locations.

Important but not usually mentioned in how to scuba dive articles is the time of the year you plan your vacation. The best time to see sharks is after their pups are born since the adults will be more active. Try to plan your shark diving vacation in the early summer months.

The time of day that you go diving will also make an impact on the chances of you seeing sharks. Try to go in the morning or late afternoon. Your shark tour dive company will have its trips planned to accommodate these hours. Never go on a shark dive after dusk.

If you find a company that offers an after-dusk dive, pick another company. Dusk is when sharks feed and it is much less safe to be in the water.

Speaking of diving companies, let’s look at the best way to pick one. There are a few things you want to look for in a company to maximize your safety and chances of seeing sharks.

First, look for a company that is headed by or employs a marine biologist. This isn’t always possible in some areas and is rare on commercialized shark diving tours. The effort you put into finding a company with a marine biologist will pay off once you’re in the water.

Dives led by specialists will result in you learning and appreciating much more about sharks and their behavior. You’re also more likely to see a shark since the experts track their locations and behaviors.

As was mentioned briefly before, look into whether your company baits sharks or not. If you can’t find it on their website, it’s worth calling and asking. Remember that sharks are much more likely to be violent if baited or provoked.

Cage or no cage? That depends. If you’re trying to dive with great white sharks, then you’ll be hard pressed to find a company who doesn’t use a shark cage. If you don’t care what kind of sharks you see, on the other hand, choosing a cage free dive will be a much more organic experience.

If you’re ready for or packing for dive day, congratulations! Here are a few last things to consider before you take the plunge.

Stay away from wearing anything shiny. This means nothing metallic, bejeweled, or glittery. Sharks are attracted to shiny things and you will look like bait to them instead of an observer.

When you’re in the water, do not stay near the surface. The prey that sharks eat swim near the surface and you don’t want there to be any confusion between you and their dinner!

Finally, stay with your group when you’re diving. The ocean is a big, scary place and sharks are wild animals that aren’t always predictable. Stay near your instructor and don’t stray too far. Staying close will help keep you as safe as possible.

After looking over our how to scuba dive with sharks guide, you should have everything you need to decide if a shark diving adventure is for you. What will you decide?