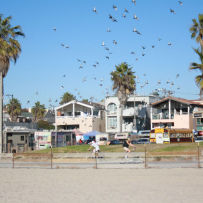 Take a long look at any traveler bucket list and it’s likely that seeing the Northern Lights is a big priority, if it hasn’t already been crossed off. This natural phenomenon lights up the sky with beautiful greens, purples, reds, and yellows, and is caused by the collision of solar wind with magnetospheric charged particles (don’t worry – that’s the sciencey bit over and done with)! Although it’s best known for its northern cameos, it can be witnessed in many different areas of the world.

Named after the Roman Goddess of dawn, Aurora, you’re more likely to catch a glimpse of this natural light show where light pollution is low. Normally, you’ll see the lights between 5pm and 2am, when the sky is clear. The lights aren’t very predictable – so luck has to be on your side – but they are more commonly witnessed between September and March in northernmost countries. Up in Swedish Lapland, Torneträsk is a picturesque lake, even if ‘träsk’ does mean ‘swamp’ in standard Swedish! You’re most likely to see the lights on a cool, dark night with little moonlight and clear skies. In the winter, Torneträsk often freezes over, so you will enjoy the Northern Lights from a frozen wonderland. Another Swedish lake, Jukkasjärvi used to be a Sami marketplace and is surrounded by beautiful natural scenery. However, this destination is best known for its iconic Ice Hotel, which has become world-famous for its amazing architecture. Every year, this jaw-dropping inn is rebuilt from snow and ice, including the chairs and beds.

Artists from all over the world are asked to create individual, annual decorations – there is even a bar with glasses made of ice! The Ice Chapel is a firm favourite for marrying couples, even if the structure remains below freezing at -5°C (pretty chilly!). From this frozen palace, you can also catch the Northern Lights when it occurs. Þingvellir is one of the most popular destinations in Iceland, and for a good reason! It’s home to Þingvallavatn, the largest natural lake in Iceland. It also boasts one of the oldest parliaments in the world, Alþingi, which was established in 930 and stayed in this National Park until 1798.

There are great hiking trails and camping grounds, as well as scuba diving for the very brave! Seeing as Iceland is so sparsely populated, light pollution is unlikely to be a problem, making this one of the best places in the world to catch the Northern Lights.

Read the rest of this post here. This article is courtesy of http://www.cruise.co.uk/