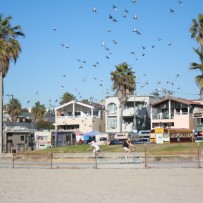 This mockumentary, created by Mike Stoklasa and Jay Bauman of Red Letter Media, takes the viewer on a “Ghosbusters“ tour of New York City. The two hosts in this mockumentary have some, uh, problems, shall we say.

Random Trivia: did you know that the song “Magic,” which appears in Ghostbusters during the film’s highest moment of tension, did not net the song’s writer and performer, Mick Smiley, a record deal? The song was included in the movie’s official soundtrack, but Smiley was unable to secure a record contract despite the film’s wild popularity. A few years after Ghostbusters, Smiley wrote the song “Kiss Me Deadly” for rock superstar Lita Ford. The song went platinum, but Smiley still couldn’t snag a record deal for himself. Sigh..record executives..when learn they will!