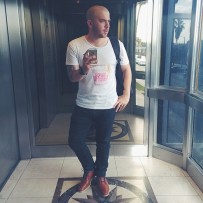 Men’s lifestyle blogger and YouTube mastermind Joe Miragliotta knows a thing or two about creating captivating video blogs. He also knows a thing or two about airports — that’s because he practically lives in them. I recently sat down with Joe (metaphorically speaking) to ask him a few questions about his rise to stardom, and he was kind enough to answer my meandering inquiries.

What made you want to start a YouTube Channel in the first place?

Like most YouTube viewers, I started watching funny little viral clips my friends would send me. Every now and then I would come across a person talking to their camera and found myself captivated with what they had to say. To think a person who is by no means what we would call “famous” was able to gain such interaction and praise from viewers had me intrigued. It introduced me to a new kind of audience, an audience I could speak to directly like we were having a friendly conversation.

How do you think the content of your channel has changed over the years?

My content has changed A LOT over the last few years. The main thing would be quality from the video productions, topics, and how I present myself.

Do you do all your own video editing? If so, do you ever get tired of having to do it, day in, and day out?

I do all my own editing. It’s hard to say I’m tired of doing it since it really doesn’t take too long. Thankfully I know the ins and outs of working with editing software. But I will admit if I were able to just let go, and not be a control freak, I would love to pay someone to edit for me.

Your channel has the occasional “Would You Rather” episode, in which you stand with a few friends and answer generally insane questions. You must receive submissions too crazy to even mention on your show. Where could one read these?

HA! Believe it or not I don’t have much of a filter. That is actually one thing I should work on for the sake of brands because I tend to use the whacky Qs. But if I were to direct you to a place where I sometimes answer insane questions it would be on my Tumblr (joesdaily.tumblr.com). I get some pretty whacky anonymous questions. Other than that, next time I ask for “Would You Rather” questions on Twitter, just check there.

Joe Miragliotta and a friend laugh during a “Would You Rather” segment.

Your men’s lifestyle blog, JoesDaily.com, paints a picture of a blogger who travels constantly. How many trips do you take over the course of a month?

I love traveling so I’m happy you actually picked up on that. Lately I’ve been traveling a whole bunch. I would say on average it would be anywhere from 2-4 trips a month. Sometimes they are local, though. For example as I answer these questions I’m heading off to a Scion event in an Uber. God bless technology.

Months ago you left your full-time job (because the company you worked for crumbled) to pursue being a full-time entrepreneur. Was this transition easy for you?

Great question. And yes, I’ve been extremely fortunate for the support I’ve had behind me on this new venture. Basically all the clients I worked with under the business that crumbled decided they wanted to stay with me since I was the one who took care of them day to day. Long story short, I would have done this a LONG time ago if there weren’t legal issues with leaving a company with clients.

You’re the co-host of 60SR, an amusing Youtube show that covers celebrity news and gossip. One of the episodes begins with you saying, “Miley Cyrus tweets a photo of herself in bed with Harry Styles? Liam, if you’re watching this, you might want to put your ear muffs on.” Do you write your lines or work with a group of writers on this show? How many hours a day do you have to spend reading celebrity gossip sites in order to stay in the loop?

I actually do write my own lines, hence the crappy one liners. I’m not too into pop culture like I use to, but I do love the occasional gossip story, so I would say I spend at least 30-minutes a day browsing those type of sites.

Another episode of 60SR ends with you saying, “Selena Gomez, call me.” Did she ever call you, and if not, is it possible that you didn’t try hard enough to make sure she saw that particular video?

Oh boy. I’m not even sure what I would do if Selena was into me. I didn’t even tweet at her the video. Probably because I would be too embarrassed for her to see it, haha. And no, she didn’t call.

Sometimes your videos contain important public service messages. In your Doritos Massacre video, which you filmed in Vegas, you advise your audience to drink responsibly. I thought the point of Las Vegas was to be as irresponsible as possible. You disagree?

You’re right, Vegas is all about being irresponsible. I think in that video I was in a state of regret: slightly hungover and not remembering how I destroyed the Doritos. My “drink responsibly” message was more of a shout-out to myself saying, “hey let’s not do this again.”

You recently launched a website called Mens-Lifestyle.com, sort of a Pinterest for men’s lifestyle blog posts. Why did you create it, and how epic would you like this site to be?

I created the men’s lifestyle curation site because of the way I think people are using sites now. In my mind the steps most go through when viewing a site is like this:  IMAGE > CATCHY TITLE > CONTENT. Very rarely do you see people share something with a lot of text and no images. Because we are becoming a more visual society with all of the tech at our finger-tips, I wanted a site that is visually exciting without the BS. If you see an image you like, you scroll over, read what it is, and click to check out the article. Ideally I’d like the site to be a daily ritual for the male 18-40 demographic.

Joe Miragliotta, thanks for taking the time to talk today.