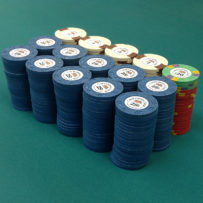 Casinos are frequently depicted in the media, in movies and television shows, as they can add tension, excitement and unpredictability. As any casino gambler including those who started playing online will tell you however, this is also true of the experience in real life – which is a big part of the appeal. This article will take a look at some of the craziest real-life stories to have emerged as a result of casino gaming.

Many people consider themselves to be high stakes gamblers, but when compared to one Ashley Revell they are naught but lightweights. This tactical genius – or madman depending on where you stand – opted to bet the entirety of his net worth on a single spin of the roulette wheel. In case you don’t realize what that means, Revell took out all of his cash and sold everything he owns except the clothes he needed to attend the casino, and bet it. His resulting bet was $136,000 and he won –  walking away with $272,000.

Most people who play casino games have dreamed of securing a life-changing win at some point – but it’s probably safe to say that fewer of them dream of giving that money right back to the casino afterwards. Astonishingly, this is what David Meade, a mentalist from Ireland, opted to do after taking the Vegas casinos for a cool $1 million. He did this as part of his David Meade: Million Dollar Bet television show, which saw him test his mental skills by becoming the first player to devise a winning roulette strategy –  something even Einstein couldn’t manage. He admitted he wasn’t really a gambler at heart though, and gave all his winnings back.

This story involves an eight-year-old who is believed to have won $500,000 playing poker at an online casino. The child, who has never been named, is a prodigy who hails from India and began creating his own web pages when he was just four. As the story goes, he was using an account for the online casino that had been set up by his uncle when he won the money, but there is some dispute about whether he ever collected his winnings. Some say the site refused to pay due to his age, while his family maintained that he had played poker at the site before and was known by people who run it as the “little poker wizard” – although they were probably calling him something less polite when he took $500,000 off them.

What these stories go to show is that gambling attracts the brilliant and the mental, but that anyone has a shot at winning big if they play.